This devised piece takes the work, philosophies, and life of Italian playwright Luigi Pirandello (1867-1936) as its subject and material.  A hugely prolific, deeply unhappy writer of short stories, novels, plays, essays, and letters, Pirandello, an avowed fascist, had a complicated relationship to the question of identity.  One of the first postmodern writers, Pirandello questioned the received wisdom that any person possesses a stable identity.  He laughed at the idea that any person is capable of defining themselves, and he seriously doubted that it’s possible to ever really know another soul.  Through an ensemble-led investigation of his works and tumultuous life, we will build this piece together.  Our central question is, Who are we?  How do we know for sure?  And will our communities let us be?  We will make a work echoing Pirandello’s best plays: an evening that is fast, stylish, funny, sarcastic, passionate, and tragic. 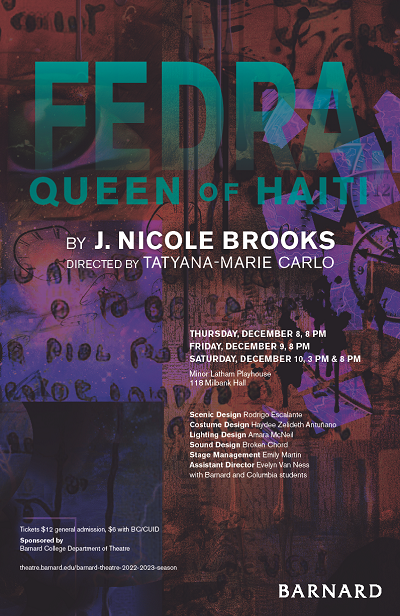 Fedra by J. Nicole Brooks is an adaptation of Phèdre by Jean Racine written in 1677 based on the original Greek myth of Phaedra, and more directly on Euripides’ Hippolytus.  Fedra is a modern retelling set in a reimagined world where modern-day Haiti is a global superpower.  Fedra is all about controversial love and ultimate betrayal.  King Theseus is presumed dead in an accident in a world of great political uncertainty.  Amid instability, Queen Fedra becomes enchanted by her husband’s son Hippolytus.  This new relationship is tested as conflicts emerge regarding the kingdom's future.  Brooks maintains much of Racine's plot, adding whimsical humor and linguistic turns, making Racine’s intense psychological drama current in a new, immediate, and pressing way.  Indeed, in this production, Fedra takes on the sometimes crazy twists and emotional turns of the telenovela.  As J. Nicole Brooks puts it,

“This play is written in a language and style that reflect agility and imperfection. . . It’s in the realm of the experimental.  The characters often topple over one another speaking.  They stammer, are bilingual, have unexpected moments of silence, or know when to speak with sharp precision—much like we do in real life.  The play draws on mythology and ideas from many cultures.”

With a poetic text, Wallace’s play explores the connection between identity and power expressed in her characters’ corporal experience and physical well-being.  Here, desire is negotiated within the structures of race, class, gender, age, nationality, and sexual preference, offering a radical feminist utopia in which the conundrums, pleasures, and dangers of human relations are made palpable for the audience.  Activating a tension between illness and release, the constricted and the carnivalesque with which we are all now too-familiar, One Flea Spare aims to open the audience to what Wallace terms “the poetics of the flesh.”

An Island Full of Noises

A workshop directed by Gisela Cardenas and Christine Giancatarino

An Island Full of Noises is a sonic theatrical experience inspired by Shakespeare's The Tempest. It is a hybrid between theatre and a soundscape installation. Gisela Cardenas leads the project in collaboration with Christine Giancatarino, a Feldenkrais Certified Practitioner.

What will happen when, as Prospero says, we make the performance "invisible / to every eyeball?” Can other ways of perceiving reality be discovered or rediscovered in darkness? The eye has become a central organ in our fast-paced culture, making the visual sense dominant while leaving other experiences unaccounted for. Are these obsessions with screens, and images, silencing the capacity to be present and fully inhabit the moment with the other? We want to invite the audience to enter a space of complete darkness, confronting the invisible others of the island through sound. With microphones and objects, actors will perform following the dramaturgy of the sonority proposed by Shakespeare's The Tempest. The language as breath and sound, the silences, and the numerous elements invoked in the play will be explored and enhanced with digital and analog mechanisms to create a performance of sounds that trigger the imagination and physical sensibility of the audience. How can this complex landscape of hate, ambition, and mistrust potentially open a more in-depth experience of reconciliation and forgiveness between mind and body? We want this experience to be a meditation on hate and the power of love as an alchemical element of the soul that, through forgiveness, allows us to abandon the island where we may live as masters but isolated inside our finitude.